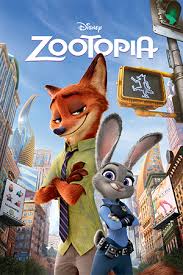 This movie is about a bunny tring to be a cop. Everyone doubts her. She is the first bunny to be a cop. When she becomes a cop she blackmails a fox so he can help her on the case to find Mr. Otterman after he went savage. Turn out all the animals that went missing went savage. The mayor tried protecting the city by keeping the animals in captivity. The bunny clls ZPD and tells them it was the mayor's fault. They still don't know wwhat was causigng them to go savage. When the sheep takes over the mayors position the find out she's been druuging the animals for them to go savage. Officerhops and the fox hep eachother to capture her. After they capture her the fox becomes the first fox ever to be a cop. The bunny and the fox becom partners.

Over all I would watch this movie again. The set-up was gooad and the rising action was good also. I've seen plent of movies and I thought I would know who was infecting the animals, but I was totally surprised at who it was. The way the chacters mouthed the cartoon was prett good and the emotion matched the voices. There are some character in the movies in whch i've never seen inany other movie.